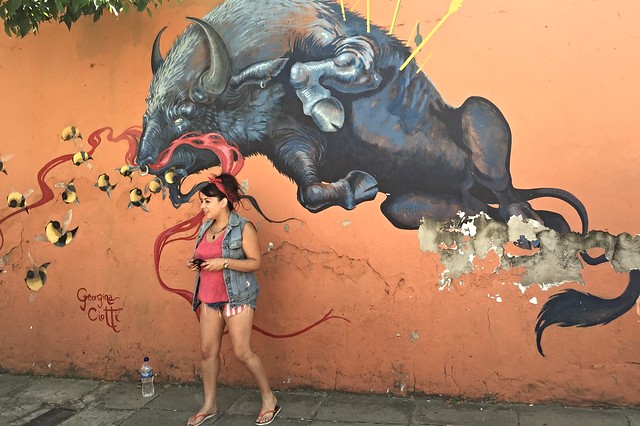 Here’s a late night city bright in color, rich in food, gritty about art, with music that goes on for for days and days. It looks like a mishmash of Lisbon, Berlin and Paris but costs like Milwaukee.

I went to Argentina for a wedding in Rosario and stayed in Buenos Aires for another week and a half. I couldn’t think of too many friends who had been to Argentina, but when I asked Facebook for tips, essays of recommendations came in. I loved it there and it seems like other people do too.

So, why doesn’t this city doesn’t get more praise? Well anyway, here’s mine.

But first, some quick business talk. 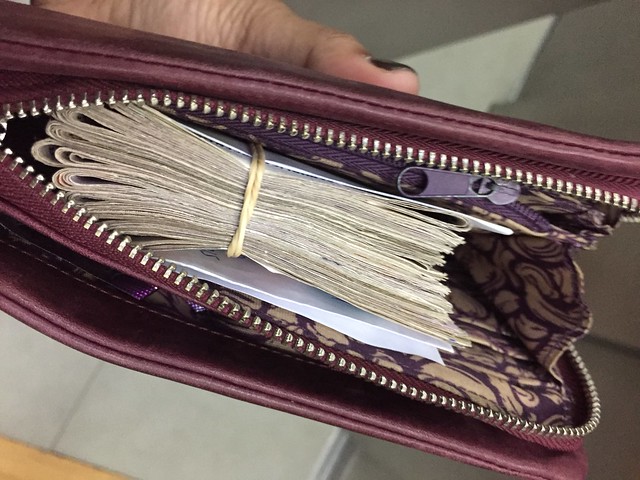 Some Argentines save their money in US Dollars instead of Pesos because it’s a more stable currency. So it’s understood American travelers will trade their currency on the illegal but tolerated exchange rate of 13:1 instead of the official rate of 8:1. My Airbnb host helped me out with this but I kid you not my friend traded his dollars for pesos at the Blue Dolar rate at a Western Union. The point being, you’ll be able to find someone. This does mean you’ll have a lot of cash with you, so make sure where you’re staying has safe to lock up your money. 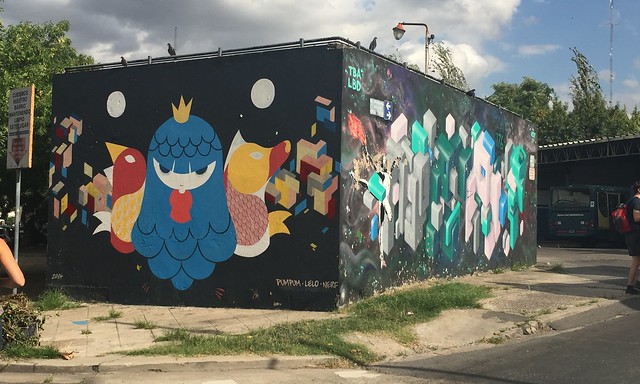 The Graffitimundo Street Art Tour is my only must-do event in all of Buenos Aires. Sign up for the Palermo (North) tour on your first day in the city. You won’t know what to do yet anyway, so just do this. It’s the perfect introduction to the social-political context of BsAs, the tour is in English, it funds artists, and will change how you see the city during the rest of your visit. I loved it so much I later signed up for the South tour of the murals, plus you get to go to the ‘hood. If you can, get a tour with Ana. 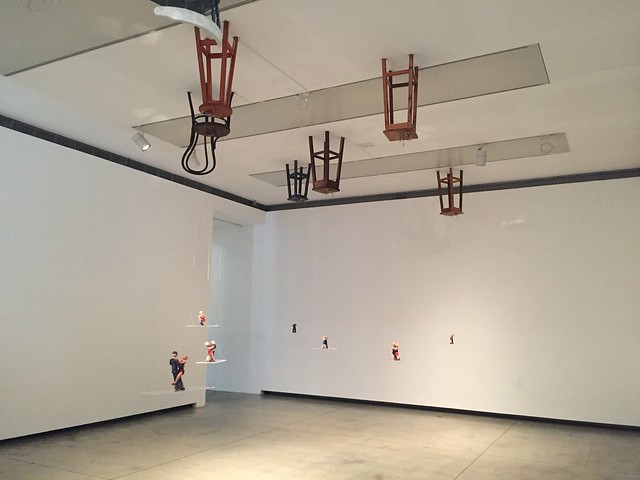 If you do go on the South Tour or visit La Boca, give yourself 30 minutes to visit the hipster Proa museum beforehand. Their website says they’re closed on Monday but it was open the Monday I went. It’s lovely and seems like the only other thing worth doing out there.

I tried to go to Banchero Pizza for lunch but it actually was closed. So I got an overpriced pizza on the colorful street and watched some tango dancers. It was really touristy and pretty cute.

But if you’re hungry for an art museum, the MALBA curators have their act together. It has great light, good flow and left me feeling floaty and spacey when I left. There’s a Frida Kahlo there and lots of experimental pieces. Save some time for the museum store, the Blue Dolar exchange rate made this a great place for gifts. 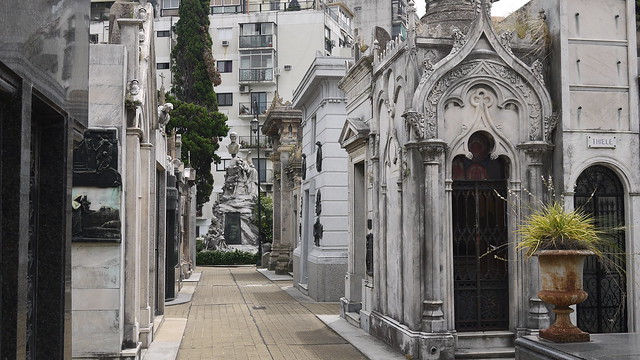 The Recoleta cemetery is fantastic. It would be a shame to come all the way to Buenos Aires and not stroll through here. It’s not too far from the Evita Museum which is quality and surprisingly huge. It’s worth visiting if you’re in the neighborhood but I wouldn’t recommend making the trip for it specifically. She had great high heels. 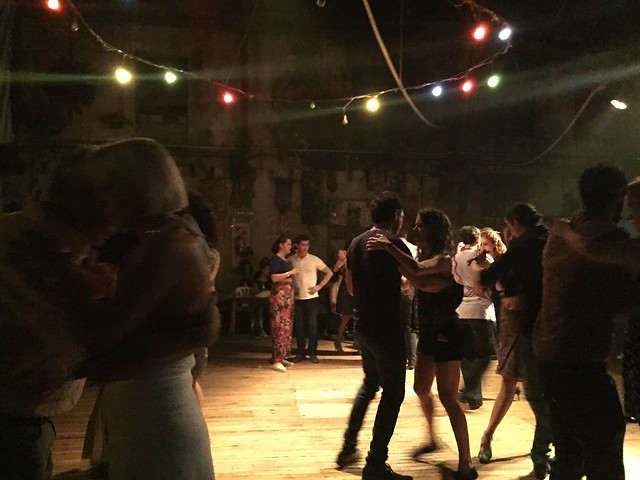 And speaking of high heels, bring them for a tango class at La Catedral, an old flour factory. Tuesdays are a great night to just watch people dancing and classes seem to run most nights. My friends said the times of the classes on the website are not reliable, so I recommend contacting them or asking in person. It’s foreigner and tourist friendly without being gimmicky. That being said, the sidewalks are uneven which might explain why I only saw women in flats for platforms. Leave your stilletos at home. 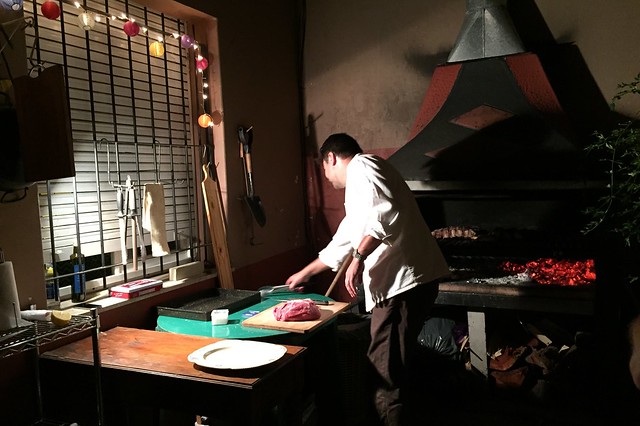 Here’s what I everyone told me and also what I learned. Don’t wing it on restaurants if you want a great meal and go for dinner around 10:00pm. There’s lots of mediocre stuff out there. I also learned I must not like steak because I couldn’t get into the cuts at Don Julio, Ming and a few other places. Go figure. The chorizo was spicier and more satisfying if you find yourself in the same boat as me. Here are some good less obvious restaurants for when you’re tired of fancy animal-slab restaurants: 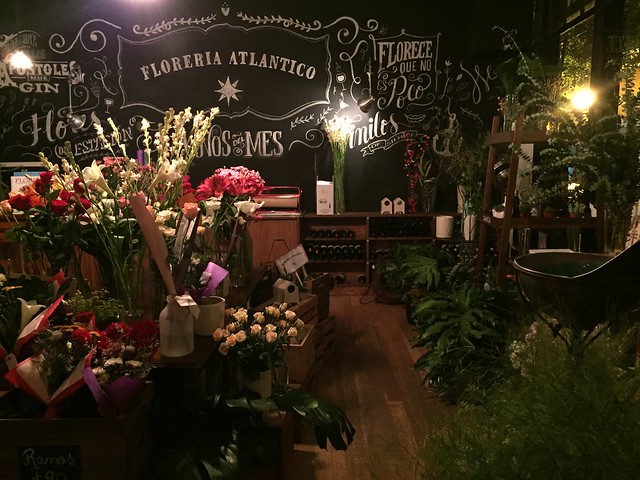 I’m sure there are hundreds of lovely places to have drinks in Buenos Aires. I’m only going to recommend two, both are in Recoleta. The first is Floreria Atlantico, which, as you can tell, is also a flower shop. It smells as beautiful as it looks. We did a quick tour through the shop and basement bar but didn’t have the patience to wait for a seat. It’s worth going just for the sights and smell. There are flowers in the cocktails. Sweet. 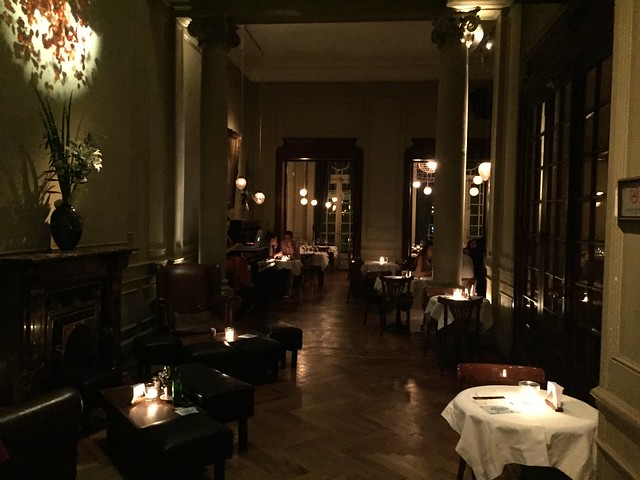 We moved onto Milión just a few blocks away, a Mansion turned restaurant and bar. It’s run by a group of artists showcasing  several beautiful of the contemporary pieces by local professional artists. It’s worth coming here to lay on the marble steps and sip a cocktail while housey-disco wafts through the corridors.

Twist my arm, if you really want a third recommendation, Victoria Brown in Palermo has tasty prohibition style cocktails, good house music and a soft steam-punk aesthetic. But not in that Burning Man kind of way.

I did half a day of shopping in San Telmo. I started at Plaza Dorrego and walked down Defensa aiming for Plop that carries cool, creative, urban, well-priced items. I got a long-sleeved black dress with an asymmetrical zipper across the neck and the body hand painted by a local artists and a hand-made lambswool cape. There are a few other good shops nearby. You might have better luck than I did in Palermo Soho or Plaza Serrano. Several blogs pointed me to Villa Crispo for leather goods. I went to almost every shop there and found most of the stores to be too expensive and mostly just selling jackets, don’t bother if you want a broad exploration. 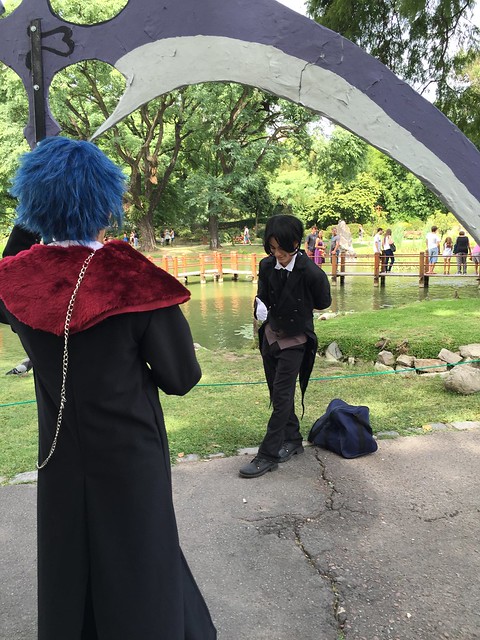 The California kid in me just wanted to have a quiet nap in a park. The Botanical Garden and the Japanese Garden both had the actual lawn areas roped off with plenty of benches for sitting. Oddly enough the day I went to the Japanese Garden happened to be Manga Day, so it was flooded with Argentines dressed like Japanese characters (above). But I imagine the garden otherwise is a peaceful quite place. 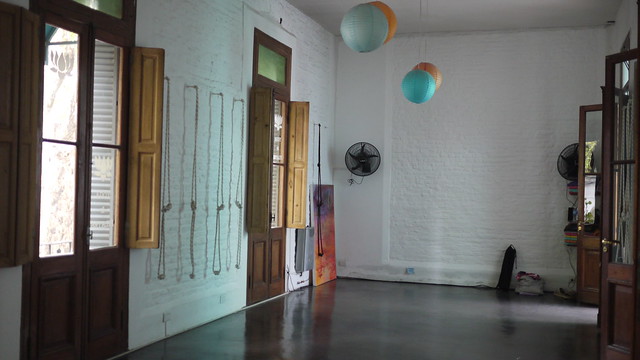 If you’re looking to stretch it out after the long flight, take a class with Agustina Villar at The Urban Lotus yoga studio in Palermo. Agustina lived and practiced in San Francisco for 7 years. At home in Buenos Aires, she teaches a beginner-moderate Forrest style class in the small studio, gives a lot of attention, and is a fluent English speaker. She’ll translate the Perrito Abajo (downward dog) but it helps if you speak Spanish depending on who else is in the class. 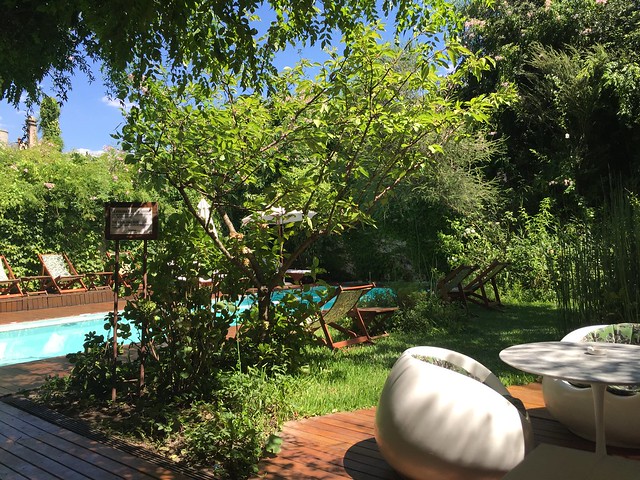 I don’t usually do spa days on vacation but I had a refreshing change of pace at the Home Spa in Palermo Hollywood. I had a deep tissue massage, a light salad for lunch, a bottle of crisp white Torrontes wine. It was the perfect way to cool down by the pool on a hot day. 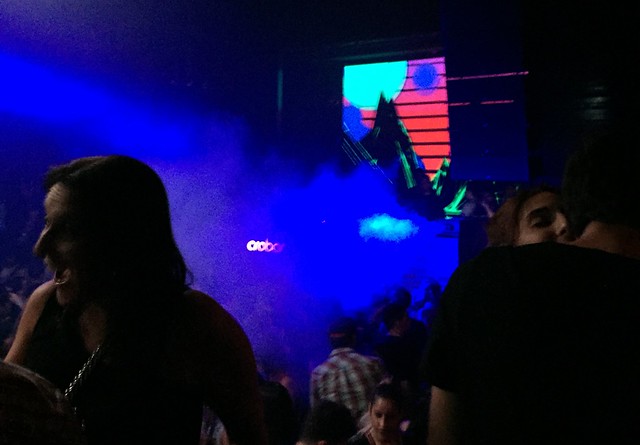 This is the friendliest group of party people I’ve ever met. One appeal to techno-tourism is knowing you have friends and family everywhere. But people at these bars and clubs were exceptionally friendly and initiated conversations all night. Even the candy-poppin-late-night-clubbers were extremely polite and endearlingly offended when I didn’t say perdón or excuse myself while moving through the big crowds.

The picture above is during tINI’s set at Crobar which is just a big ‘ol club. There was never a line for the women’s bathroom, and the outside patio was lovely, and sometimes trains still pass by over the old train station. If I lived in here, I’d probably claim to never go to Crobar. Then some DJ worth seeing would come to town, I’d buy a ticket, whine about the big crowd then at 5am the music would get weird, people would go home, and I’d happily get my dance on.

Which brings me to the late night schedule. We napped until 2:30, got to the club around 3, the music got pretty good around 4 and there was space to dance around 5. It wasn’t hard to find the after-hours party at C’est Club in Palermo which was worth visiting for the sake of techno-tourism. If you’ve ever been to an afters before, anywhere in the world, it was exactly like that.

The Resident Advisor for Buenos Aires is not very good. A friend of mine said to visit the clubs’ Facebook pages and look for related and recommended events.

There’s a good an outdoor/indoor cocktail bar in Chinatown called Puerto Uno. The DJ was spinning some cozy housey tunes from a few years ago. Start but don’t end your night here. Look for the big black doorbell otherwise you’ll have trouble letting the doorman know you want to get inside.

I went also to a loungey dance bar Levitar a couple of times to hear some local DJs. This spot was closer to home and open later than Puerto Uno. It was like a mix of 222 Hyde and 111 Minna. It’s not quite a destination spot, but a good techno hangout in Palermo if you want to hear some music late without committing to a bold night out.

I imagine Rosario is a lovely place to live up but not really a city for vacationing.

If you do find yourself in Rosario, here are a few things I recommend:

Hookipa – If you can somehow get to the Yacht Club and hire a boat to take you across the river, you’ll find paradise. There’s a short patch of sand, bronze Argentines, and a treehouse serving beach tunes and Big Gulp sized caipirinhas. The water’s brown, but it’s not dirty. And this is a local’s spot, so play nice. 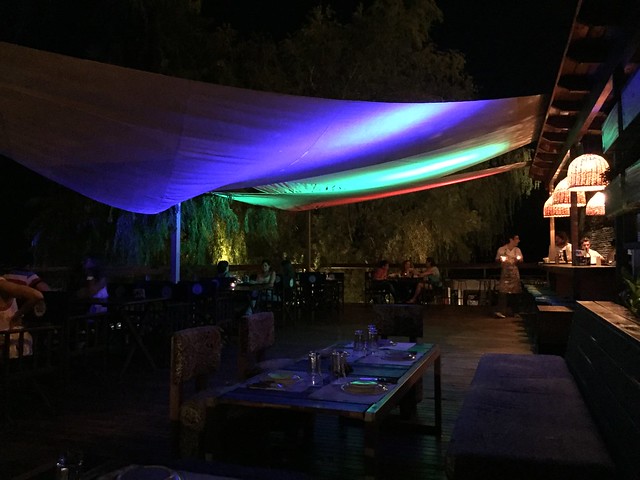 Los Jardines – a lovely waterfront dinner restaurant and bar on the water that is open late with nice lighting and comfortable seats. If you’ve been eating meat for days, have the salad with pumpkin and quinoa. They accommodate large groups well, too.

Complejo Davis – Come here for the nice sit by the river, skip the art museum. I didn’t meet one local who had ever been to this art museum, we went anyway. It was nearly empty. Save your time, they truly had to turn on the lights and elevator for us.

Adios is an antiquated farewell. The locals say ciao.